We oftentimes receive emails that ask for “Phase 1” or “Phase 2” clone trooper armor or helmet kits. While we completely understand why most clone trooper fans use these terms, we feel that it’s important to learn the differences between Movie Realistic and Animated armor along with why we choose not to use the “Phase” terms.

One of the most amazing aspects of the Star Wars saga is the evolution of clone troopers that George Lucas created to visually show the creation of the clone army and how they eventually turned into Imperial Stormtroopers. Throughout the saga films and the animated Clone Wars series, we see several variants of clone armor which are typically divided into two segments, commonly called Phase 1 and Phase 2. 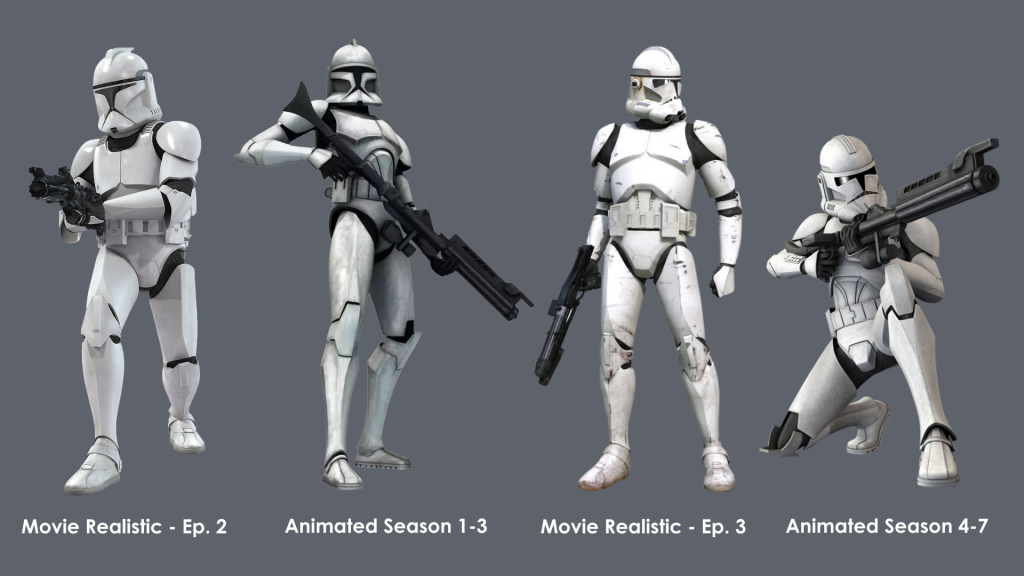 We tend to not use the phrases “Phase 1” or “Phase 2” as they can be applied to both the movie realistic clones seen in Episodes 2 & 3 as well as the animated style clones from The Clone Wars television series. If you are looking for a specific type of clone trooper armor, please understand that we use the following phrases to describe specific clone troopers:

Movie Realistic– these are the clone troopers from the Star Wars movies including Episode II: Attack of the Clones and Episode III: Revenge of the Sith.

Animated Season 4-7– these are the clone troopers from seasons four through seven of the Star Wars animated TV show called Star Wars: The Clone Wars.

If you send us an email, please do not use the terms “Phase 1” or “Phase 2”. We only refer to our kits based on these terms: Movie Realistic, Animated Season 1-3, and Animated Season 4-7. 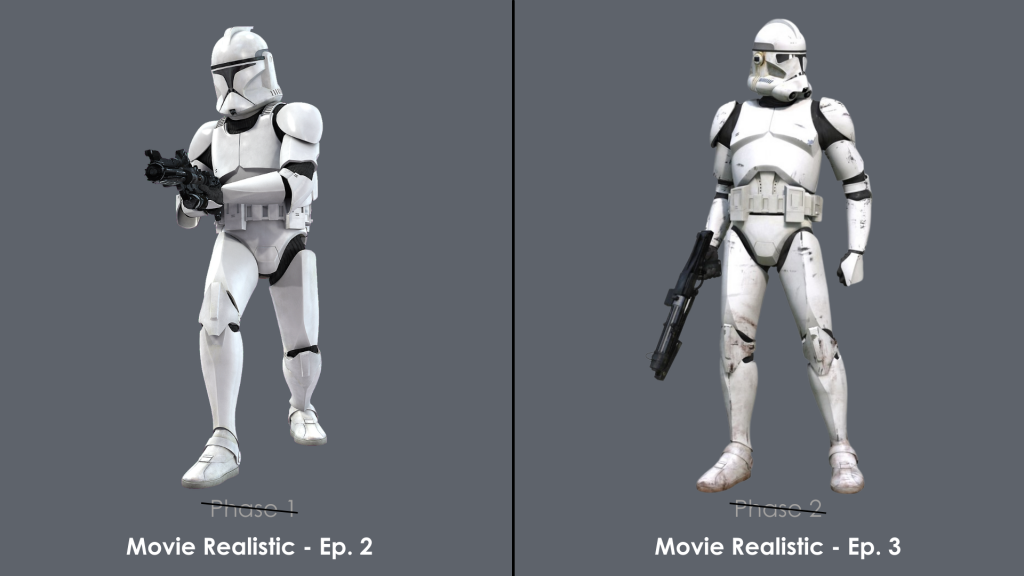 The differences between the Season 1-3 armor and the Season 4-7 might not be very apparent at first, but there are many differences when you look closely. Similar to their movie realistic counterparts, the animated clones have different helmets as the Clone Wars progresses, so you can easily identify the variation based on the shape of the lens and whether or not the helmet has a fin on top.

Other key differences include the shape of each armor part. The bottom of the chest plate on the Season 1-3 armor has a smooth, bell-shaped curve. Meanwhile, the Season 4-7 version has sharper corners to create a trapezoid shape. The cod piece is more narrow on the Season 1-3 clone and connects to the butt plate under the crotch, meanwhile the Season 4-7 armor has an open space between the cod piece and butt plate at the bottom. The shoulder bells are also shaped differently between the two armor variations and the top of the thighs are shaped differently. We could go on about these small variations because there are plenty of them, but it’s important to see that these armor kits are very different, which is why many of our Clone Wars Season 4-7 upgrade parts are not compatible with Season 1-3 armor. The same goes for our Season 3 ARC upgrade kit.

How are Movie Realistic and Animated clones different?

If you’ve seen The Clone Wars animated television series, you already know that the animation of the show is very stylized. Many of the characters have elongated faces, emphasized facial features, and much taller proportions than their real-life counterparts. Naturally, the animated version of the clone trooper look different from the movie realistic versions. Below are some comparisons of how they look different. In these examples, we will be comparing what most people call “Phase 2”, the Movie Realistic Episode 3 and Animated Season 4-7  clone troopers. 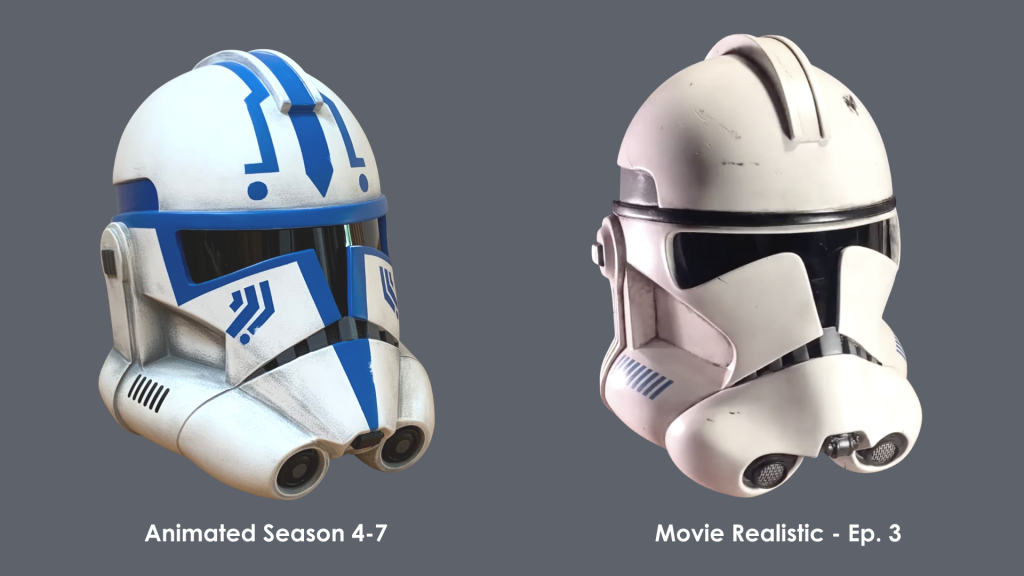 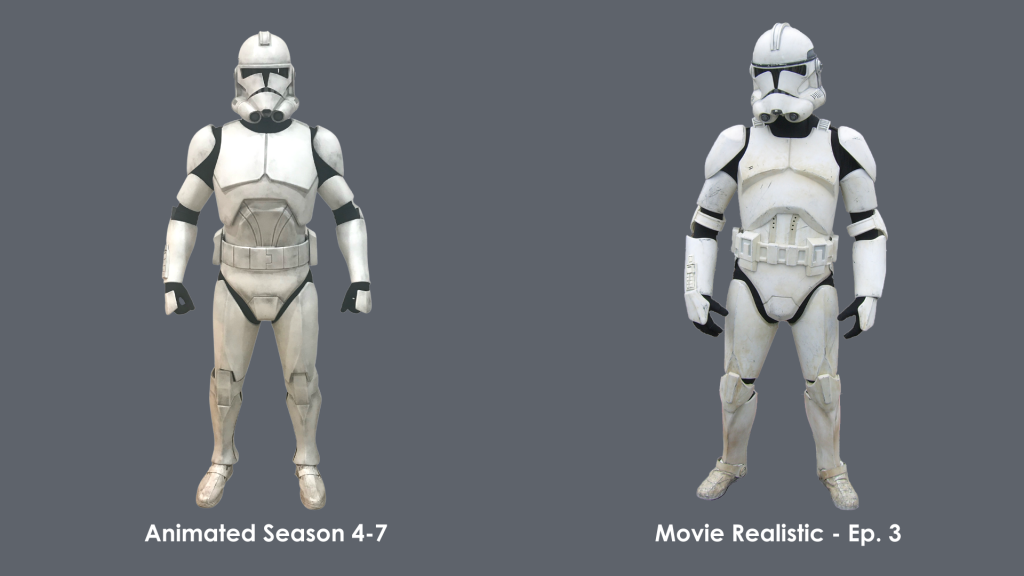 The Animated Season 4-7 and Movie Realistic Episode 3 have lots of differences. One of the main differences is the separation of the elbow and knee armor. You’ll see in our Animated Season 4-7 armor kit that the elbows and knees are connected to the forearm and lower leg armor, while the Movie Realistic Episode 3 knees and elbows float freely from the forearms and lower legs. The belt and belt boxes are another big difference between the two. The overall shape of the chest and back armor are very different between the two versions as well.

Can you mix and match parts from the animated and movie realistic kits?

No. It’s very important to note that any of our Animated upgrade parts like holster, pauldrons, commander visors, etc., are not compatible with the Movie Realistic armor. The shapes and angles of the two armor and helmet kits are so different from each other that you cannot mix and match parts. They simply won’t fit together.

We do not currently offer a Movie Realistic Episode 2 Helmet

Movie Realistic Armor (for Episode 2 or 3)